Seeing is eye's reason, but not its function.

Reading is the eye's function, but not its movement.

Perceiving is the eye's movement, but not its power.

Illuminating is the eye's power, but not its attribute.

Absence WITHOUT images; outside time; is the eye's attribute and its virtual annihilation 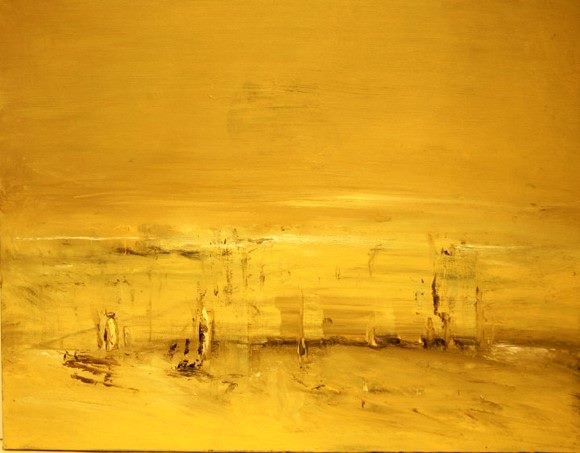 The pictorial collection by Swedish artist Maya Rygaard, explores the enduring cultural importance of the Scandinavian landscape. The landscape began to take on a special significance at the start of the XIX century.

As the XIX century came to an end, landscape art became more subjective in its form and content. We can observe more metaphorical and personal landscapes, interacting with the artist's emotions and mood changes, manifested through intensity or the choice of pallet at any given moment.

Maya Rygaard proceeds along the classical romantic path forged by the Nordic tradition in landscape art. She explores and experiments, moving from romantic classical landscapes into the abstract. Her monumental works are influenced by loneliness and melancholy, while directly reflecting the natural world of north-central Sweden.

Her works, with their powerful psychological aura, are influenced by the themes and colours of the four seasons. The long Swedish winter, for instance, with its dark pallet, near blacks, that guide us to solitary places, isolated and abandoned in eternal shadows, places that imprison us and drive us to contemplate countless existential questions about our times.

Maya Rygaard's painting is a search and an investigation into the different physical and metaphysical states of the Scandinavian landscape. A search to hoard magical moments where light and darkness play a pivotal role in the creation and shaping of each chosen landscape, and where nature's elements bear upon the living.

In 'The four seasons' we see a playful Maya Rygaard, portraying her different moods, swayed by reactions to her trips through Sweden, Finland and Norway. We observe instances of loneliness, melancholy, warmth and coldness, poetic and dramatic states.

Maya Rygaard's work seeks to illuminate small connections and fragments which link northern romanticism and modern abstraction. She was inspired by essayist Robert Rosenblum, who identified the seeds of modern abstract art in the romantic landscape art of the XIX century. An idea he expressed in his influential essay 'Modern Painting and the Northern Romantic Tradition: Friedrich to Rothko'.

This New York art historian and critic, who died in 2006, linked aesthetics and the historical-cultural tradition of primitive northern romanticism to European and American modern abstract painting. He cited artists from both artistic tendencies, such as Carl Gustav Carus, Carl Blechen, Turner, Constable, Van Gogh, Munch, Klee, Kandinsky and Max Ernst, in order to illustrate a pictorial evolution and observe the introduction of abstraction into landscape representations.

His study concludes by discussing landscapes by prominent figures in American abstract expressionism like Mark Rothko, Adolf Gottlieb, Barnett Newman and Jaksson Pollock. He also observes how the influence of romanticism lives on in the work of two contemporary European artists, Anselm Kiefer and Gerhard Richter.

Maya Rygaard has worked with landscape as a basic concept since the end of 2004. She has been investigating the most imaginative aspects of Scandinavian natural mythology: an investigation into the relationship between presence and absence, involving scenes of raw nature, without the mark of human presence, without time. We can observe signs of the endless routine changes of the seasons, where raw nature seizes every corner of our existence. Her painting has its own sensual language, free from the rules of verbal expression.